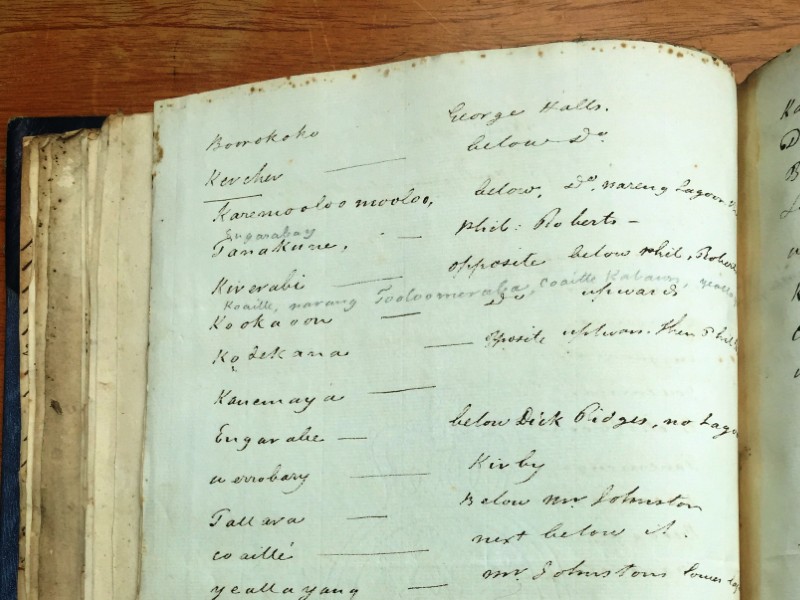 Historian Grace Karskens, in collaboration with Darug Traditional Owners and researchers, Leanne Watson, Erin Wilkins, Jasmine Seymour and Rhiannon Wright, explains how their truth-telling project looking into a long-lost list of Darug place names has the potential to permanently change the way we think about the Hawkesbury River—Dyarubbin.

In 2017, I came across an extraordinary document in Sydney’s Mitchell Library: a handwritten list of 178 Aboriginal place names for Dyarubbin, the Hawkesbury River, compiled in 1829 by a Presbyterian minister, the Reverend John McGarvie. I was stunned. I stared at the screen, hardly believing my eyes. After years of research, my own and others, I thought most of the Aboriginal names for the river were lost forever, destroyed in the aftermath of invasion and dispossession. Yet, suddenly, this cache of riches.

I could see McGarvie had taken a lot of care with this list, correcting spelling and adding pronunciation marks. The names appear in geographic order, so they also record where he and his Darug informant/s travelled along the riverbanks. Perhaps most important of all, McGarvie often included locational clues, like settlers’ farms, creeks and lagoons.

An extraordinary idea dawned on me: what if we could restore these names to their places on the river? And then: what if these beautiful, rolling words— like Bulyayorang and Marrengorra and Woollootottemba—came back into common usage?

Place names have enormous significance in Aboriginal and Torres Strait Islander societies and cultures. As in all societies, they signal the meanings people attach to places, they encode history and geography, and they are way-finding devices and common knowledge. Place names are crucial elements of shared understandings of Country, history, culture, rights and responsibilities.

Often place names are parts of larger naming systems—they name places on Dreaming tracks reaching across Country. Singular names can also embed the stories of important events and landmarks involving Ancestral Beings in places and memory. Anthropologist and linguist Jim Wafer points out their use in songs, which are memory devices, or “audible maps … travelling song cycles that narrate mythical journeys”.

Dyarubbin, the Hawkesbury River, flows through the heart of a vast arc of sandstone Country encircling Sydney and the shale-soil Cumberland Plain on the east coast of New South Wales. The river has a deep human history, one of the longest known in Australia.

The ancestors of Darug, Darkinyung and Gundungurra people have lived in this region for around 50,000 years. Their histories, cultures and spiritualties are inseparable from their river Country. A mere two centuries ago, ex-convict settlers took land on the river and began growing patches of wheat and corn in the tall forests. Darug men and women resisted the invasion fiercely and sometimes successfully.

Between 1794 and 1816, Dyarubbin was the site of one of the longest frontier wars in Australian history. Invasion and colonisation kicked off a slow and cumulative process of violence, theft of Aboriginal children, dispossession and the ongoing annexation of the river lands.

Yet despite this sorry history, Dyarubbin’s people managed to remain on their Country, and they still live on the river today.

Read the whole story in the May 2021 Reconciliation News.