When Australia walked the talk: the 2000 Reconciliation Bridge Walks

“It was one of the most significant political mobilisations in the country’s history.” (Henry Reynolds)

Twenty years ago, in a monumental display of support for reconciliation, around 250,000 Australians walked across the Sydney Harbour Bridge. The People’s Walk for Reconciliation, (as the bridge walk was titled) had a profound impact on those who participated, and a roll-on effect around the country.

“I remember looking around me and thinking ‘all these people have woken up early and rather than staying tucked in bed with the paper and a hot cuppa, or going shopping or taking the kids to sport, they’ve joined us in this remarkable show of strength.”  (Shelley Reys)

By the end of the year 2000, the walks for reconciliation held right across the country became the largest display of public support for a single cause in Australian history.

The road to the bridge walks

The bridge walks came at a highly-charged moment in Australia’s relationship with reconciliation, and with its own history.

The 1990’s delivered reports from landmark inquiries, like the Royal Commission into Aboriginal Deaths in Custody (1991) and the National Inquiry into the Separation of Aboriginal and Torres Strait Islander Children from Their Families (1997).

These revealed to many Australians for the first time, the profound and sustained cultural, social, spiritual, and economic damage caused by state intervention into Aboriginal and Torres Strait Islander families and communities, and showed how the damage caused lives on in the present.

The Council for Aboriginal Reconciliation (CAR) was established in 1991 by a unanimous vote in Commonwealth Parliament after findings handed-down from the Royal Commission into Aboriginal Deaths in Custody.

Only intended to operate for a decade – after which it was meant to ‘achieve’ reconciliation – the Council for Aboriginal Reconciliation (CAR) invested ten years of research, promotion, partnership-building, consultation and educating into the reconciliation process.

National Reconciliation Week 2000 was themed Corroboree 2000 – Sharing Our Future, of which the Sydney bridge walk was the crowning event.

The bridge walks captured the Australian public’s thirst for change and for implementation of the many recommendation of the Inquiries’ reports.

“I was ecstatic really to tell you the truth.  I couldn’t wait for that day to come because I knew that it would be a great day. I recall Gus Nossal saying at our last CAR meeting before the bridge walk that if we didn’t get 250,000 people over the bridge that he’d be a monkey’s uncle. As it turned out he was spot on.” (Jackie Huggins) 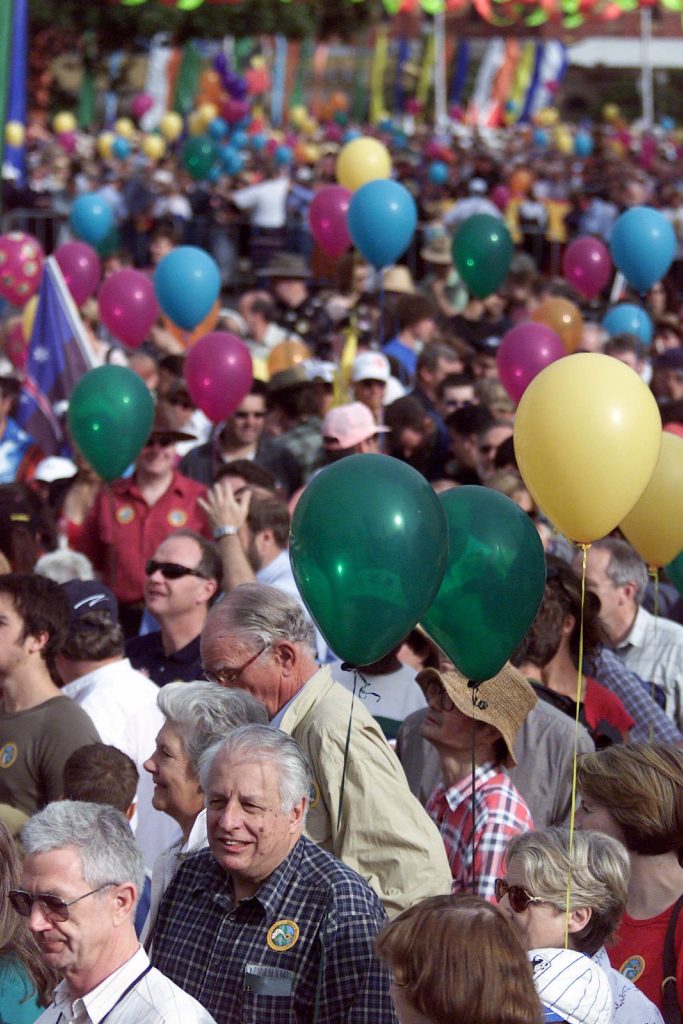 The peoples’ movement for reconciliation was strong, the fight for Native Title rights continued, and talk of a treaty was back in the air. With the 2000 Olympics on its way to Sydney, there was an optimism for the rights of First Nations Peoples in the new millennium.

The Corroboree 2000 event started on 27 May, 2000, with the largest gathering of Aboriginal and Torres Strait Islander and non-Indigenous leaders in Australian history, taking to the stage of the Sydney Opera House to witness the delivery of CAR’s final documents to the Australian people.

This support was apparent the next morning, Sunday 28 May at the People’s Walk for Reconciliation, the highlight of Corroboree 2000. Some 250,000 Aboriginal and Torres Strait Islander and non-Indigenous supporters walked, jogged, danced and sang their way across Sydney harbour Bridge to a celebration at Darling Harbour that included entertainment from, Uncle Jimmy Little, John Williamson, the Titanics, Saltwater Band just to name a few.

“I felt very humbled and very proud that Australians were saying let’s pull together, let’s do what’s right and what’s inclusive. There was such a good feeling. So much goodwill.” (Shane Phillips)

“A week ago, I was despairing about living in this country. Today, I feel great.” (Linda Burney)

Over the course of the year, close to a million people took part in reconciliation walks in all capital cities, towns and regions across the country. From the recommendations of CAR, and the proceeds raised during the 2000 walks for reconciliation, Reconciliation Australia was established to continue a formal process of making Australia a more just, equitable and reconciled nation.